I do not own a cat and never have done.

From previous posts you will know me as a dog-person. I understand dogs and it would appear that they understand me. I feel comfortable in their presence and have never experienced fear in the presence of a dog.

We have now been without a dog for three months.

There has always been the occasional cat strolling through our garden…sometimes I admit it’s been more of a major dash to avoid whatever dog we have had. I have never feared for the cat in such a chase. They can climb trees, they hiss and their claws are lethal weapons. Over the years our dogs have always given chase but there’s something in the way they have taken off that said, ‘We know, this is bloody ridiculous but let’s give it a go’.

As our latest dog, Biscuit grew older and slower we would often find the semi-wild Chloe resting easily in the warm spots of our compost heap. She and Biscuit were completely aware of each other but in their advanced years they appeared to have an agreement…the occasional fleeing journey down the garden and then long tranquil spaces of dozing and tolerating the others presence.

Then along came another visitor. A much younger cat who definitely relished the idea of a bird or two. Fortunately, our neighbours fitted a bell on her collar but she still spends many long moments simply sitting watching the comings and goings of all the birds. She also delights in gazing into the tiny pond…a large goldfish has meandered around its depths for 15years and I admit to not catching sight of it for some while!

A change has occurred since the passing of our old dog. Chloe and her companion, such is their relationship over the past months, now spend long periods in our garden. And with the using of all the compost this autumn we have put a warm red rug on the chair in the greenhouse for our elderly visitor to sleep on.

Chloe is old and gentle and very timid but she does sit easily in her little places as we wander about. She is a delicious grey and her fur looks to be very thick.

What strikes me as I watch these elegant feline visitors is their complete belonging. They truly inhabit our garden, prowling, sitting and watching. However, our young black and white visitor has more of an agenda…she intends to catch something and that something will not be a dead leaf! Our wise, elderly matron is content to prowl and sleep….enough is enough!

I am always left feeling somehow relaxed, loose-limbed and breathing more deeply after watching their way of being. I recall the same feeling when we used to sit, sometimes, for hours watching lion, cheetah and amazingly a leopard going about their lives in the African bush. Their elegance is well known and they simply flow from their centre. The energy sparkles and vibrates from their core, moving outwards into limbs that do not jerk or hesitate. These felines move with their intuition completely switched on, or so it seems to me.

In my own yoga practice I am looking for that intuitive sense of moving from my spine and inhabiting my space in such way that I feel a flow of energy easing out into fingers and toes. It, of course doesn’t always happen. If my breath is lacking and I get seduced into too much ‘trying to get it right’ I end up in a place of frustration which causes me to harden and feel very weary. To find the joy I always come back to the breath and soften into my body…think cats at this point because they have really sorted this movement thing out!

Yoga is about how you are in that moment and what have you learned from that place. Then as Ana Forrest would say ‘Breathe and step into your power’. Aho.

Below is a photo of our younger visitor earlier this month. The sun was shining and it was the perfect morning to hangout in our garden…on the bird-table. She was simply delighted to catch some rays! 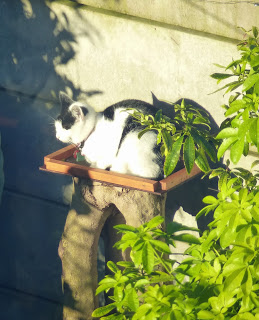 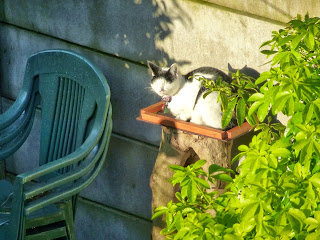 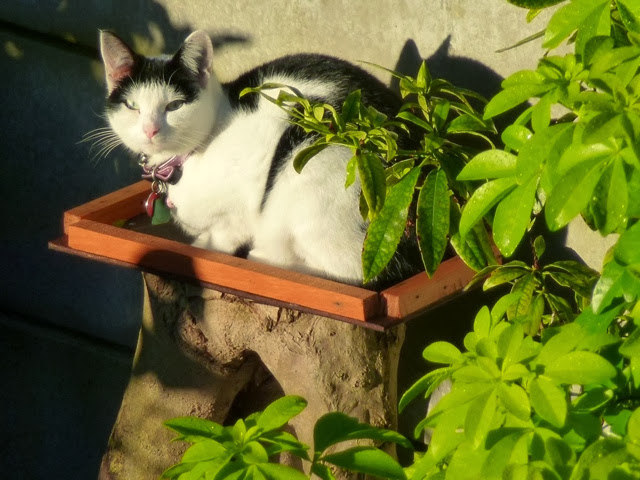