I have been baking bread for many years and for the past six years it has been made with spelt flour. I have no idea how I came about spelt wheat because back then it was not well known and not easily available here in the UK.

To make bread is very therapeutic, and I’m not talking about doing it in a bread-making machine…the joy is in the handling of the dough, the mixing and manipulation of that amazing combination of flour,yeast and liquid. How on earth does it become so gloriously flexible and elastic.

As kids, my sister and I always had a poke around with the dough and in those days it was always white flour…cos that was what made posh bread!! Even with washed hands the mixture always took on a distinctly grubby hue but Mum never turned our buns away…they were baked and enjoyed along with her pristine delights. There was no honey then either…so we had lashings of butter and golden syrup, a dietician’s nightmare.

Now, however, after years of reading, learning and sampling, I cook much healthier food and that means bread made with spelt flour is my first choice. Spelt is an ancient grain and much simpler than modern varieties. It is, therefore more easily accepted by our digestive systems as it is not such a complex carbohydrate.

The following recipe came about after spending time at Basunti doing yoga with Sandra Sabatini. Every morning after early morning practice we had a very light breakfast in silence. For me that meant a slice of Dave’s fruit loaf with a cup of herb tea…or sometimes fresh coffee, heaven!

I have substituted spelt flour and Dave always pops in walnuts which I was short of at the time..so, once again my recipe is for you to change by taking out and putting in all that you desire!

1. Mix together flour, salt and raisins.
2. In separate bowl stir yeast into small amount of liquid and add honey. Mix together, leave covered in warm place until mixture starts to have a froth, meaning the yeast is working.
3. Add rest of liquid to yeast mix and pour into well in centre of flour etc.
4. Mix really well…use your hands as now the fun begins! Knead well in the bowl.
5. Place dough on bench with either a dusting of flour…or pour on some olive oil and use instead of the flour. Knead well for 5-10minutes.
6. Cover the bowl and leave the dough to double in size. Spelt flour dough does not take as long as the more common wheat flour…so on a warm day it may only take 45minutes.
7. Remove from bowl and knead again on the bench, using flour or olive oil.
8. Form into a loaf and place either in a loaf tin or on a baking tray.
9. Leave to rise again until double in size.
10 Bake at 180/350 or gas mark 4 for 45-50 minutes.
11.Leave to cool…serve with butter.

Please use this as a basic recipe and add any fruit you may desire…dates, sultanas, cranberries, walnuts,pecans and even pop in some cinnamon or mixed spice.  PLAY! 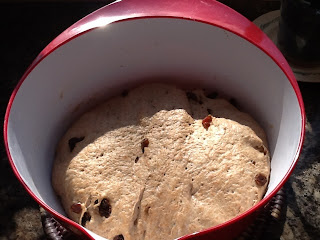 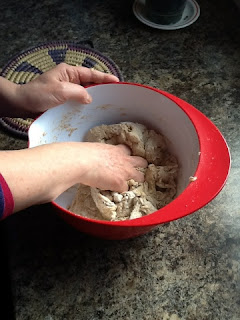 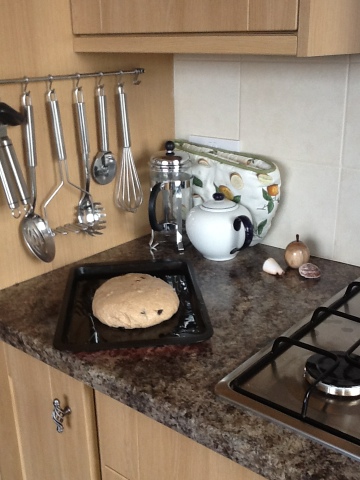 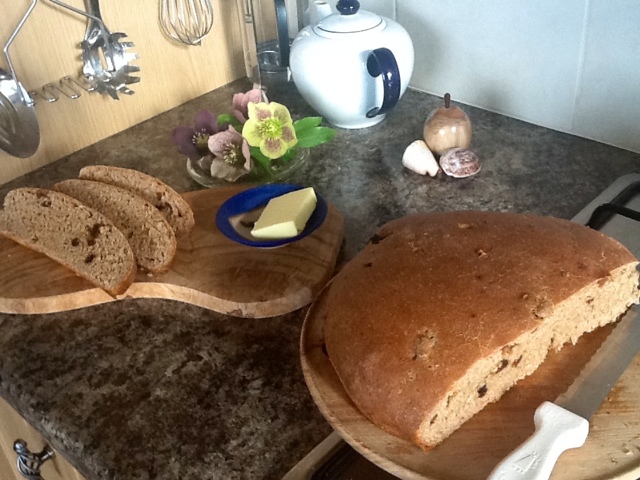 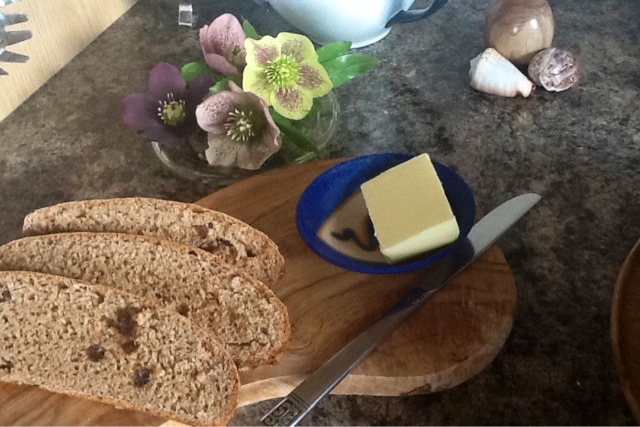 A little butter and away you go…..eat and enjoy.