Hot Cross Buns, traditionally an Easter treat but now available in supermarkets all the year round!

I decided this rather grey Thursday to set to and make my own having relied on M&S for years.

Normally everything I bake is as healthful as possible….wholewheat flour, brown rice, etc.

So I strayed somewhat from my healthy route by using strong white flour!

METHOD
1. Dissolve one teaspoon of the sugar in warm water and sprinkle dried yeast into mixture. Leave until frothy.
2. Meanwhile sieve flour, salt and mixed spice into a mixing bowl.
3. Add the dried fruit and mix well.
4. Melt the butter gently and beat the egg in a seperate bowl.
5. Make a well in the flour mix and pour yeast, egg and melted butter into it.
6. Mix together using a spoon and then draw everything into a dough using your hands.
7. Knead on a floured surface for about 6minutes until the dough feels elastic and has a sheen to it.
8. Pop back in the bowl, cover with a greased plastic bag and leave for about an hour to double in size.
9. Knead the dough again and form into 12 rounds, placing them on an oiled baking tray with plenty of space around each bun to allow for expansion. Make a deep cross on each bun with a sharp knife.
10. Leave again in a warm place to rise for a further 25minutes.
11. Bake in a preheated oven gas mark 7, 425/220 for 15mins.
12. Brush each bun with sugar glaze as soon as they come out of the oven.

I did not make the pastry cross. My personal reason is quite simply I prefer them without!

MY ALTERATIONS;
I do not have sugar in my pantry so honey was used in the yeast mixture and coconut palm sugar was added to the flour mix in place of the caster sugar. No currants and mixed peel were to be found and so raisins and cranberries were popped in. After all M&S have all manner of variations so I guess I can get away with this!

And that is that… A great treat to be served warm with butter. 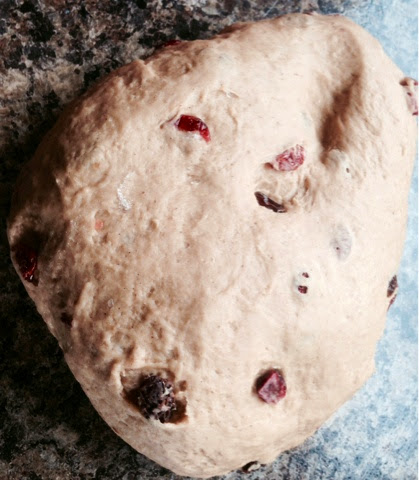 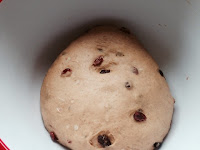