Today is now sunny and bright. It rained earlier and by that I mean a real downpour. So I’m always amazed when only a couple of hours later we have a blue sky and sparkling light.

Sitting here thinking about it I’m aware of a large number of great days during the past few months of autumn and winter. Other parts of the UK have suffered greatly from high winds, flooding and general climatic chaos but here in the North West we have been blessed with much kinder conditions.

When we moved here all those years ago people looked knowingly at us when we mentioned Manchester! Words like ‘oh dear, all that rain’, ‘rather damp conditions’ and ‘of course the cotton industry developed there because of all the moisture in the air’ were uttered with relish by anyone not living in the region of our new abode!!

Rules around rain did not apply once we returned home….it simply rained whenever and for as long as it wanted. How the hell did one plan an outing to the hills, sea or town centre? We rapidly re-learnt the need to pack for all possibilities whatever that nice person on the weather said!

Which leads me to state, for the record that, we Brits in the North West had a glorious autumn. Now I know that come a few more months, memories will fade and we will firmly believe we had the usual dank, damp, unpleasant end to the year. So let it be stressed here that autumn 2013 was different! The sun shone, it was very mild and dry. I know these things because I was out there gardening, walking and taking photographs. Normally, I do not venture out to garden during the period October-March.

Memory is a weird thing. We tend to lose it as the years pass. We also remember things differently to what was actually the reality. I once upon a time had a really great memory and, like our father, could recall times, people, places in their minutest detail. My husband could hold up a photograph and I would recount date, location, who we met and what we ate for lunch!

Then I became a mother and traded in my memory. What, you might ask did I get in return? Confusion, chaos, angst, joy, a sense of there being a grander plan than I understood or indeed felt comfortable with and, a beautiful, tiny person who definitely seemed to have an understanding of the grander plan.

My memory, as it once was has never returned and so it is!

It seems to me that one of the reasons we become forgetful is that there is simply too much to remember. There is too much information and we move so rapidly through our lives that we don’t really take time to stop and breathe into the experience of that moment or event.

One way to remember is to commit words to paper or blog them so that you can share (inflict) your recollections on others. I have also realised how I like to take photos so that I have a pictorial remembering of that day/occasion. What follows are some photographs I took on a walk we enjoyed along the Macclesfield Canal in November and because I can ‘see’ the day I remember the whole day very clearly. I know it was warm enough to sit out in our garden and enjoy coffee with our chimanea burning merrily and that we shared a lovely lunch with our daughter and her partner. The entire day comes together as a result of me seeing the pictures of that morning.

Can it also be stated here that after living in South Manchester for 27years It would be fair to say that the weather is no worse than anywhere else in the UK and, indeed, seems to be a helluve lot better than some areas. I know these things because, until recently, I have been a dog-walker and have felt the weather on a twice-daily basis.

It is worth considering that one way to remember something is to simply stop trying….soften your brain, breathe and relax. It may take some time but when you least expect it the information you need pops right back in to the front of your brain! We try too hard to do too many things in our life and then wonder why we are exhausted, frustrated, angry, disempowered, the list is long and maybe it’s worth stopping right now as you are reading this. Stop and consider your day and how you feel, physically, emotionally and mentally….namaste. 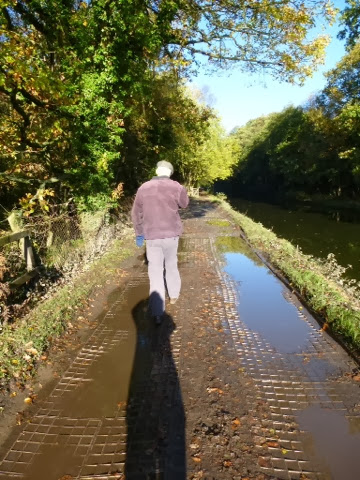 Long shadows on a November morning. 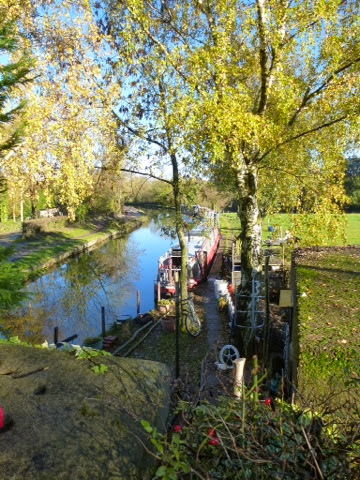 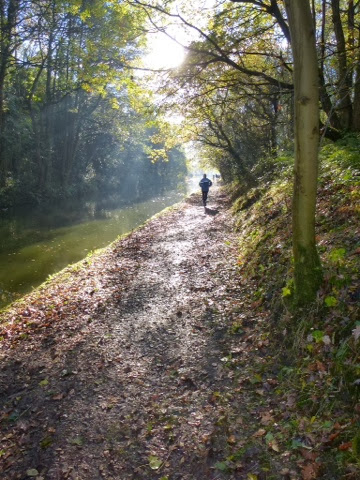 That is NOT us jogging! 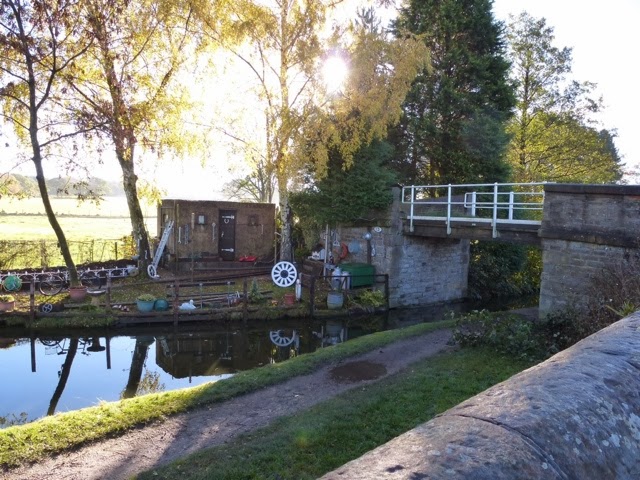 The wee building in this picture was built as a pill-box for defensive purposes during the war.
I’m not convinced it was absolutely necessary but it has given someone a very useful store next to their barge. 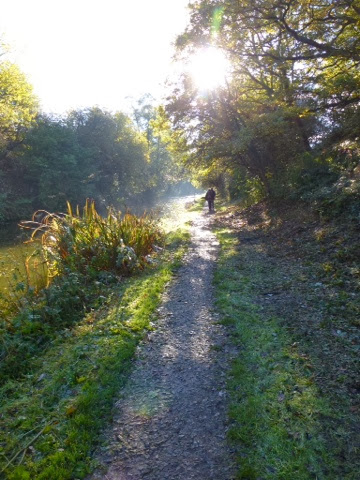 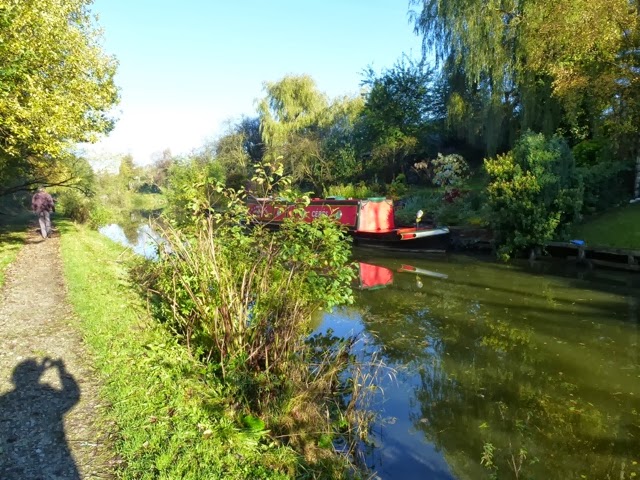 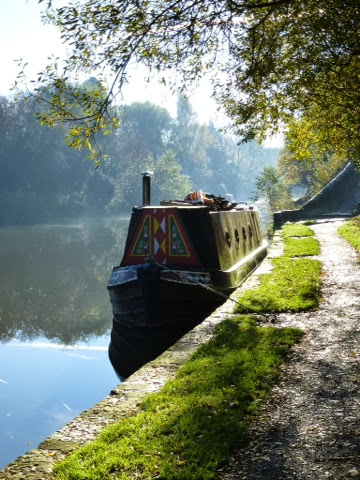 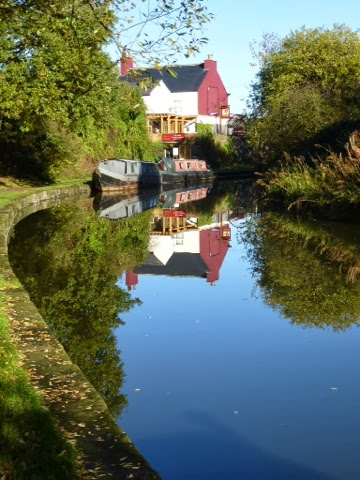 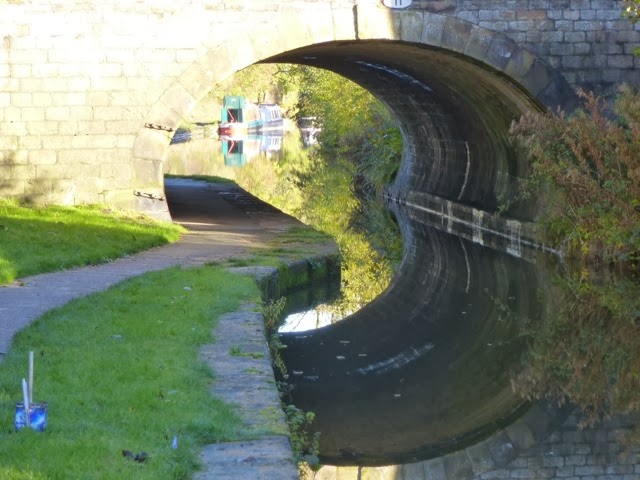 Under the bridge to Marple. 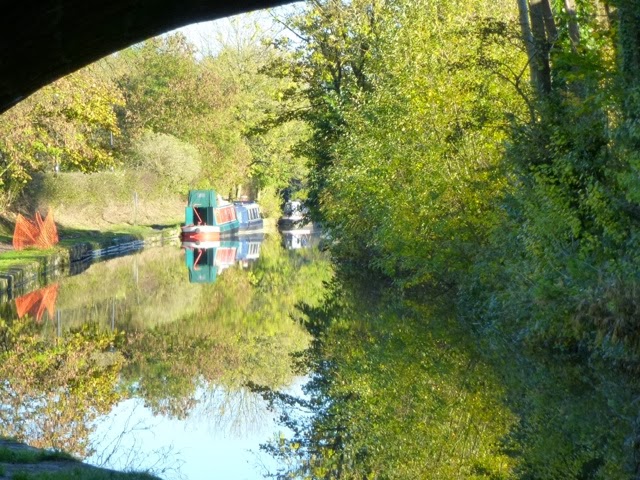 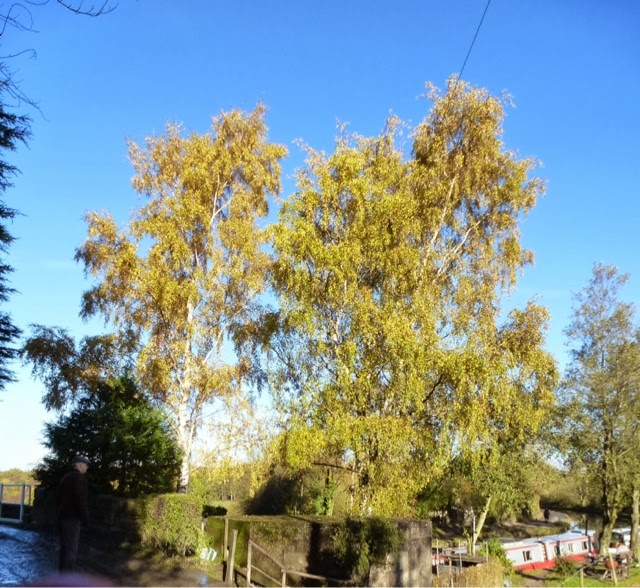